The first teaser is out for Rebekah McKendry’s “Glorious,” the Lovecraftian gloryhole horror thriller hitting Shudder later this Summer.

“True Blood” star Ryan Kwanten plays a hungover man who has to use a public bathroom. When he begins to hear a strange and omniscient voice (J.K. Simmons) coming from the hole in the partition between stalls, Wes is pulled into a reality-shattering trip that no one will believe – that is, if he lives to tell the tale.

Blending dark comedy, gore and cosmic horror, the film is inspired by the works of H.P. Lovecraft and will release on Shudder on August 18th. 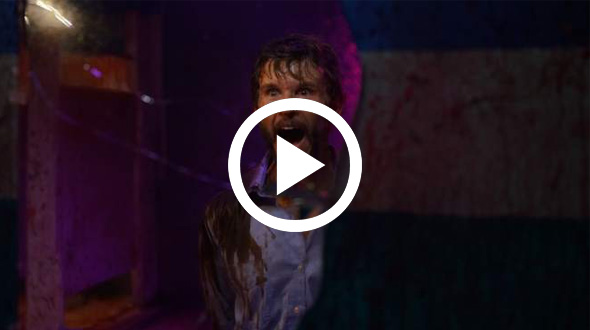 Boyega plays a Marine veteran denied support from Veterans Affairs. Financially desperate and running out of options, he takes a bank and several of its employees hostage – setting the stage for a tense confrontation with the police.

A new trailer is also out for Rob Zombie’s adaptation of “The Munsters,” more specifically the Blu-ray, DVD, and digital format release on September 27th. The film is expected to have its debut on Netflix prior to that date.

The new trailer looks at the courtship of Herman Munster and Lily Munster as Grandpa Munster looks to try and stop the two from getting married at all costs.

Next there’s the trailer for Netflix’s “Look Both Ways” which follows the story of a young woman (Lili Reinhart) who has a one-night stand with a friend. Soon after, she takes a pregnancy test and the film diverges – showing two different worlds where that simple pregnancy test caused a huge change in her life.

Finally comes the trailer for Owen Kline’s coming-of-age comedy “Funny Pages” about a teenage cartoonist who rejects the comforts of his suburban life to move to the city in a misguided quest for soul. A24 will open the Safdie Brothers-produced film in cinemas on August 26th.